As a Town Hall 8 you want to be farming quickly so that you can get up further into the game. Become a Town Hall 9 and get an Archer Queen and X-Bows! It is important to max out all your buildings, troops and most especially your walls. Having all Level 8 walls really helps you at Town Hall 9 and makes you less vulnerable to better Town Hall 9s and 10s. I would recommend that Town Hall 8s farm in the region of Silver I – Gold II (1200-1600 Trophies). Here the loot is good and there aren’t as many Town Hall 9 and above who will try and steal your loot. 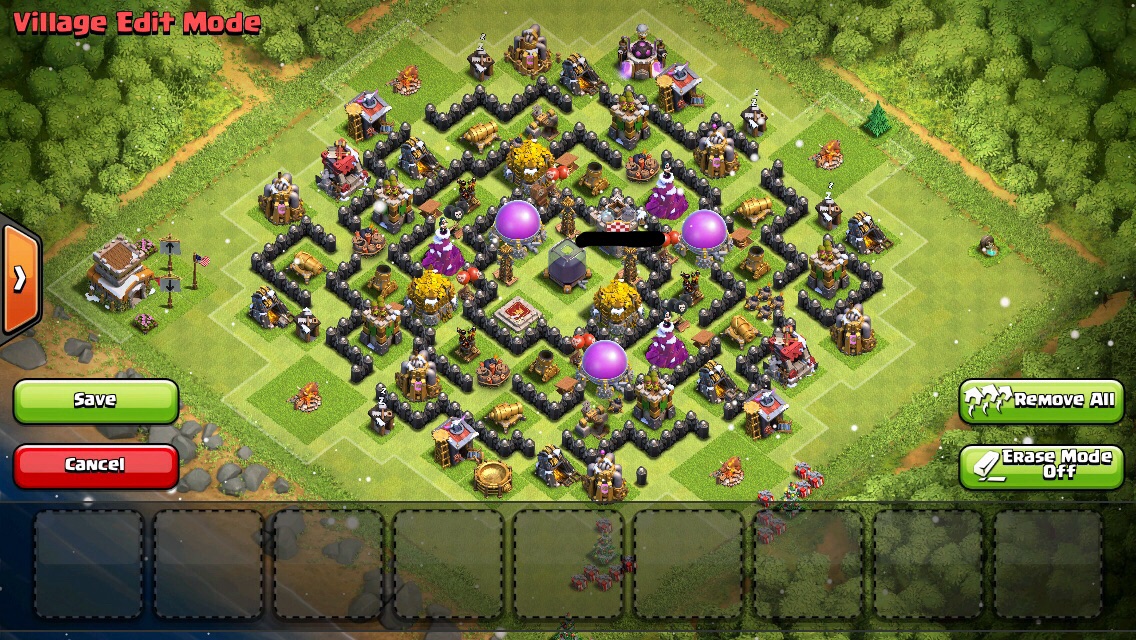 As you can see from the image this farming base design’s main purpose is to protect the a Dark Elixir storage (in the middle of the base). Dark Elixir is very important for a Town Hall 8 player because it is used to upgrade the Barbarian King and Dark Troops. The only problem is that due to the lack of X-Bows and Inferno Towers it is very easy for Town Hall 9 and 10 players to steal Dark Elixir (and also gold elixir).

This base is named “The Niner Terminator” because of its ability to defend attacks against Town Hall 9s and above. It is arguably one of the best Town Hall 8 farming bases.

This base exploits Troop AI (Artificial Intelligence) by creating a funnel which cause Giants, Hogs, Golems and Balloons (etc.) to travel around the base instead of penetrating into the middle of the base where the Dark Elixir Storage is. This funnelling protects the base from most Giant, Balloon and Hog based attacks. Even the gold and elixir storages are protected well if the troops stay on the outer layer of the base.

“The Niner Terminator” is specially protected against the Barch strategy (Barbarians + Archers). The storages are all in the middle of the base and are all protected by Wizard Towers (Splash Damage). All 4 Mortars (Splash Damage) cover the whole of the main base and alot of the outer buildings are also protected.

The Air Defences protect a very large proportion of the base which defends from Air Attacks such as Dragons which is used frequently by Town Hall 8 users.

If any troop reaches the core of the base they will be quickly destroyed by the high DPS (Damage Per a Second) defences such as Hidden Teslas, Archer Towers and Cannons which will target the troop and eliminate it quickly.

A centralised Clan Castle means that it is not easy to lure out Clan Castle troops which can cause problems for the attacker later on. The Barbarian King is also in the core of the base for optimised Dark Elixir Storage protection.

If a Town Hall 8 or below attacks you (while using this base design) it is likely that only 2/6 storages will be destroyed and the Dark Elixir Storage will be untouched.

If a Town Hall 9 or 10 attacks you it is likely that 3-5 of the storages will be destroyed (depending on attack strategy used) but it is likely the Dark Elixir Storage will remain unscathed. 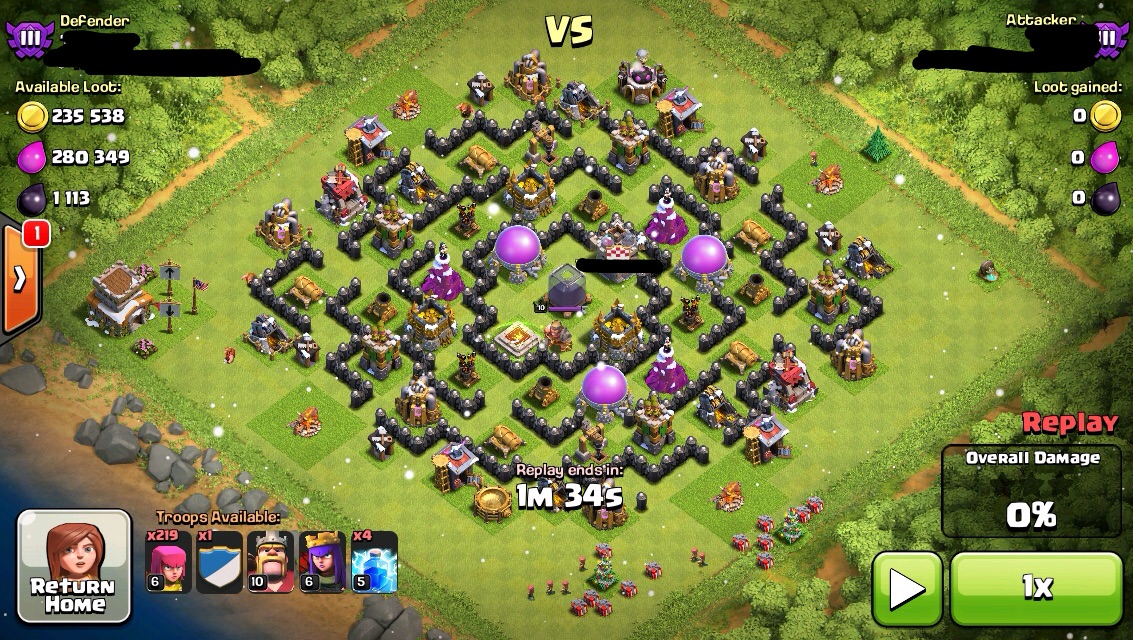 What the enemy will see! 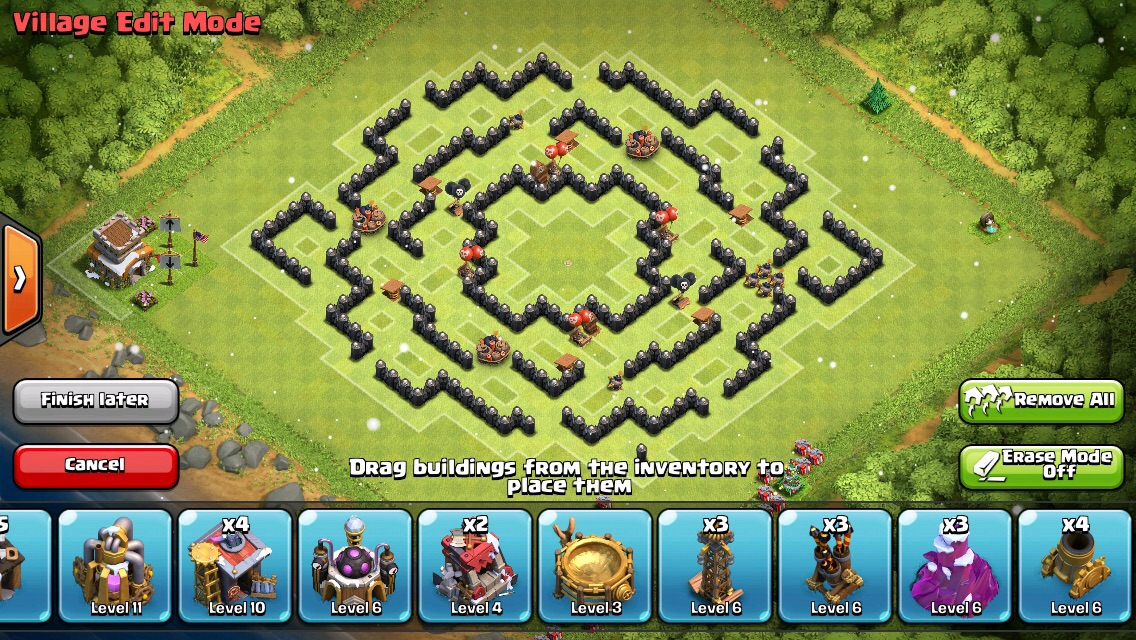 Summary: This base is perfect for defending your loot from Barch and Giant Based Attacks. If you are struggling to retain Dark Elixir then I would suggest switching to this base design. I would not recommend using this as a pushing or war base! 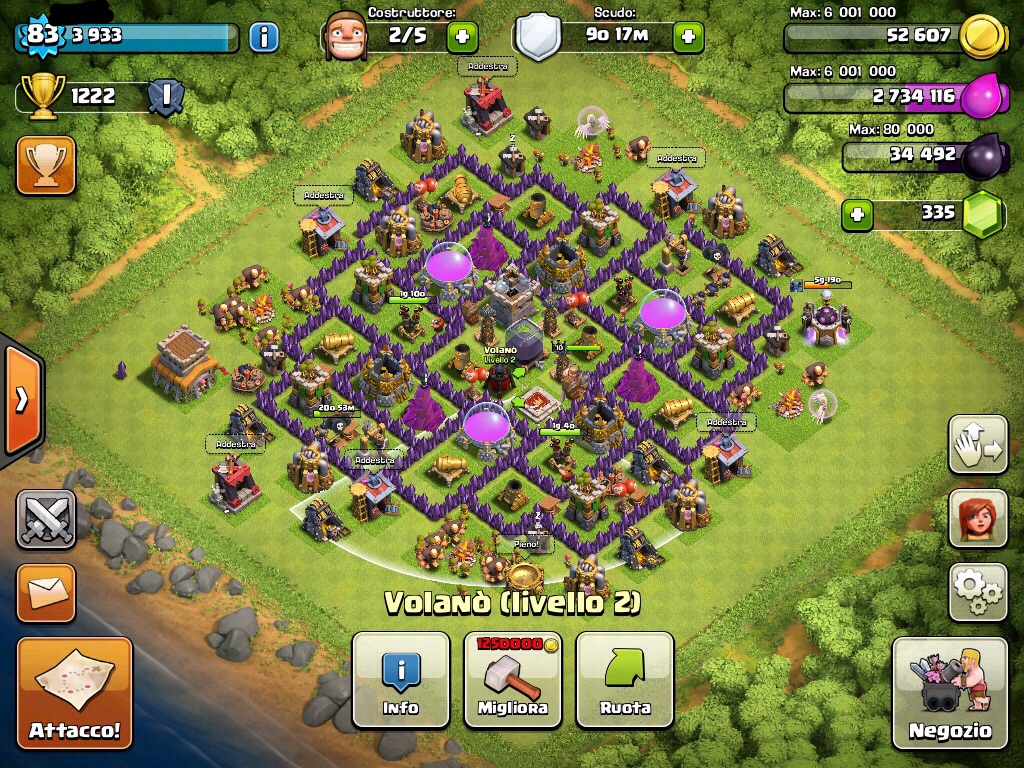 This farming base is named “The Edge” because of its tendency to cause troops to remain on the outer section of the base.

Like “The Niner Terminator” it’s main purpose is to protect the Dark Elixir Storage located in the centre of the base. Hidden Teslas, Giant Bombs and at least one Mortar are all protecting the centre where the Dark Elixir Storage is located. Every Storage is in its own wall compartment which means that attackers will take longer to move through the base preventing them from stealing as much loot from you.

This base is symmetrical which means that there is no side which is easy to penetrate into the core of the base. There are no structural defects of this base and even though you see a wall missing (on all four sides) from the base this is to help funnelling. If you like you can place walls there to stop troops being allowed easily into the first layer but the purpose of it is to distract Giants and other Defence-seeking Troops. Due to the first layer of the inner base being mostly made up of defences it creates a trap for Giants and other Defence-seeking troops and causes them to run around the outside therefore protecting your storages especially the Dark Elixir storage.

The Mortars are spread evenly within base, covering a large area which includes other defences and ALL storages. The Wizard Towers are protecting all the Gold and Elixir storages and in combination with the mortars defends this base well against Barch due to the effective use of splash damage.

The Air a Defences are spread in the base so that they cover the whole area which defends well against Dragons and Balloons. In combination with Air Bombs and Seeking Air Mines which are located on the outer section (to deal more with minions) and inner section (to deal with balloons and/or even Lava Hounds).

The Spring Traps and Normal Bombs are located on the first layer of the inner base and they help get rid of troops like Giants and Hogs which will be travelling around the edges of the base. They are placed in areas between openings in the walls where troops will walk into due to their AI. The walls in this base are placed so that it is difficult for Wall breakers to break into multiple compartments. 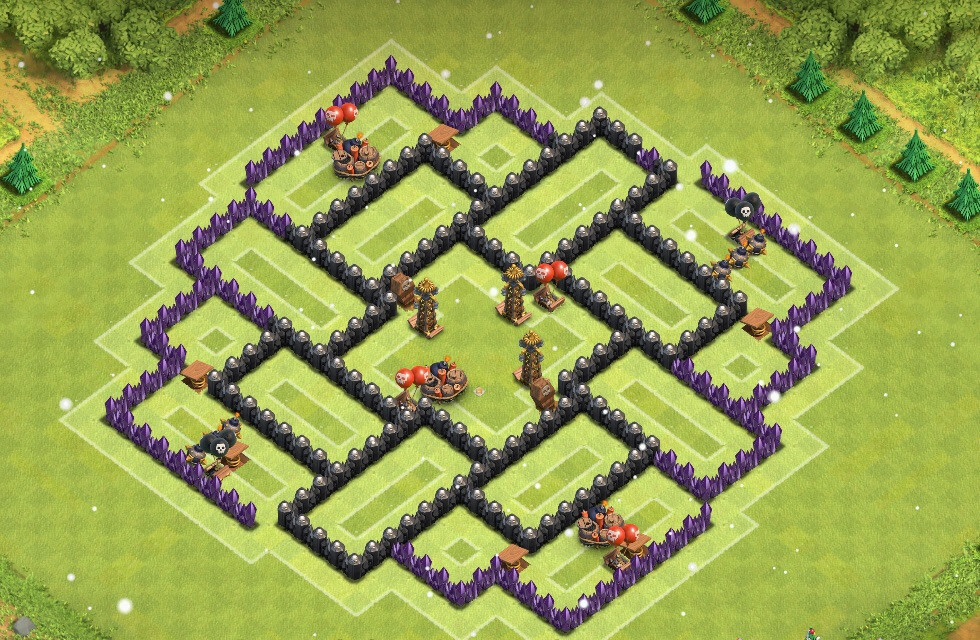 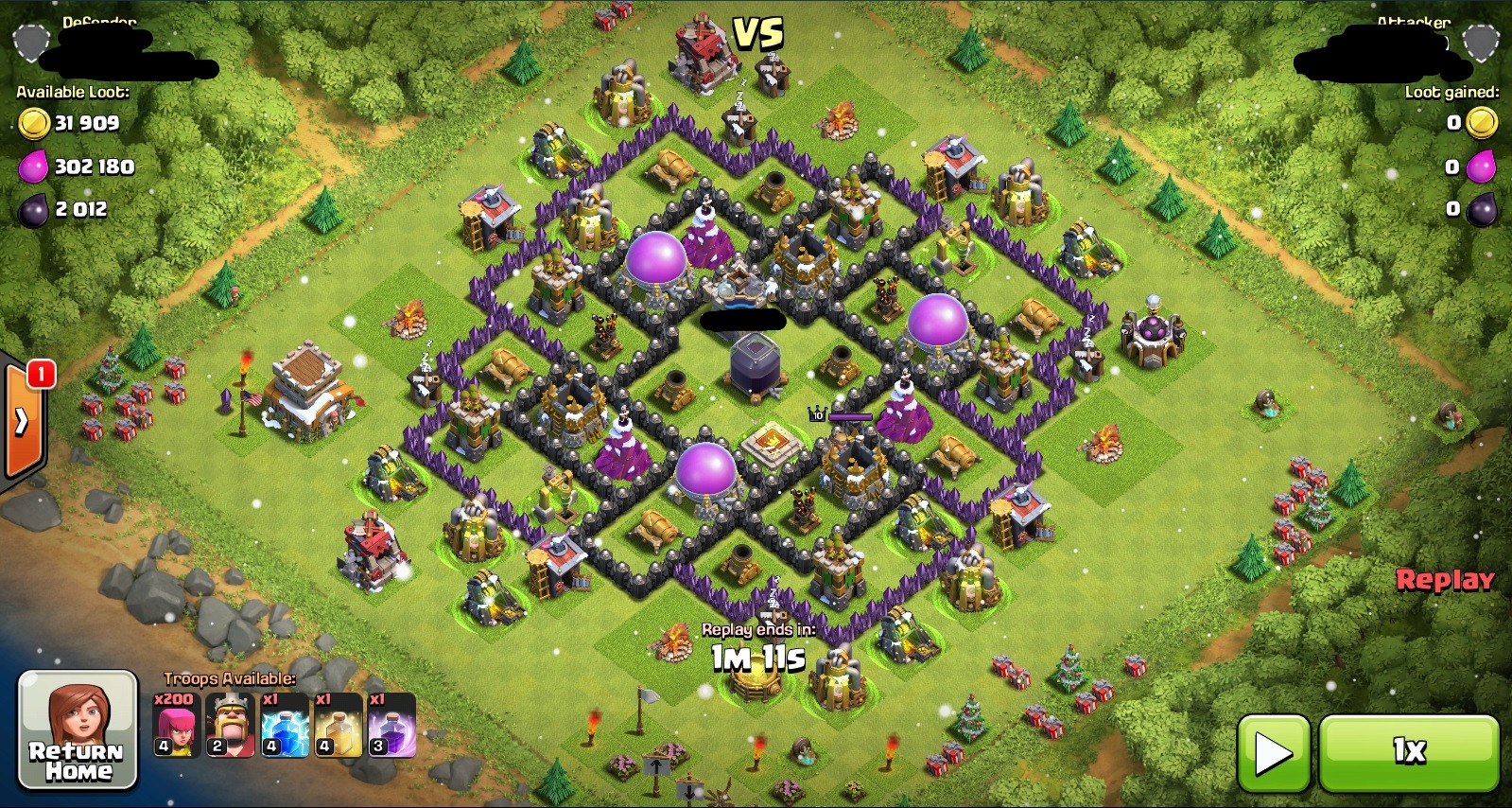 What the enemy sees!

Summary: This base is extremely effective against Giant and other Defence-seeking troop based strategies but is more vulnerable to attack by Barch than “The Niner Terminator”. If the Town Hall was moved into the core of the base it could be used as a war/push base but I’m about to show you some even better War Bases!

As a Town Hall 8 you may have noticed that in wars the main attack strategies are Dragons and GoWiPe (Golems, Wizards and PEKKAs). This is why it is very important to have a base which can defend against these army compositions. The less stars the enemy have, the more chance you have of winning. Remember! Every Star Counts!

Although you may not have seen this base alot, don’t underestimate its power to exploit Troop AI and cause people to get a 1 star while attacking this base.

Centralised Air Defences and Air Sweeper makes this base very effective against Air Attacks especially Dragons. The Air Defences cover a large area of the base and overlap eachother to cause cumulative damage against a high health air troop like a a Dragon or Lava Hound.

There are lots of defences in range of the core which means that there is a high DPS in this area. Tank troops like Golems and Giant will easily be destroyed here which leaves lower health troops and enemy heroes vulnerable. This can prevent the enemy attacker from getting a 2 star on your base!

The Air Bombs and Seeking Air Mines are all located in the core of the base which means that if any air troops get into the centre of the base they will take a lot of damage. This would be vital if lava hounds were being used. 2 of the 3 Giant Bombs are located in the core of the base where they can take out multiple units. The Skeleton Traps are near to the Town Hall so that enemy troops will be distracted by the skeletons and refrain from attacking the Town Hall for a short time period. The Bombs are scattered around the first layer of the base and are aimed at damaging lower health troops like wizards and archers. Spring traps are placed near the wall intersections so that they can get rid of Wall Breakers and/or incoming Giants.

Due to the position of the defences on this base wherever the enemy attacks from they will always be subjected to a funnel created by this base. It takes an experienced attacker to overcome this funnel.

Arrows indicate where troops will move after being deployed.

Here is another case and this shows that no matter where the troops are deployed from they will always be subjected to this funnel on this base layout.

Summary: This base design is definitely a good one to be used in war. It provides great defence against Air Attacks like Dragons/Balloons, GoWiPe and Barch. It is a difficult base to 2 or 3 star so would help your clan in wars. The only problem with this exact base layout is that it is vulnerable to Hogs. If you were to use this as a war base I would recommend you switch some buildings around in the core to make Double Giant Bombs in order to combat against Hogs. This base could be also used as a pushing base but the storages should be moved inside.

This base does have a lot of outside buildings and some are not protected by defences. This is to make the distance where the enemy attacker can place troops to the first layer of walls larger. This means that troops will take longer to reach the walls and be subjected to more damage from the defences. This is very effective against Dragons as they may not even enter the base when the attacker wanted them to.

The red dots represent where Dragons or other Non-Defence Targeting are deployed.

Due to their Troop AI instead of moving into the base they will move to nearest building which will take them around the base. By the time they enter the base the troops will be damaged and have a less chance of getting a 2 star.

This base is named “The Turtle” because of its hard “Shell” or strong Wall Layers. This base has some Wall intersections which jut out slightly from the rest of the base and this can distract Wall Breakers and cause them to destroy unnecessary Walls which ultimately will cause the Troops to move in an unintended path.

Clan Castle is centralised so it is not very easy for enemy attacker to lure out troops. They will have to sacrifice some of their own troops to lure the Clan Castle.

If troops were to get into the core of this base they would be destroyed quickly and it would take a strong raid to get the Town Hall down as well as the 50% in order to get a 2 star. The Hidden Teslas, all Four Mortars and 3 Archer Towers are all in range of the Town Hall in the centre of the base. This is a very high DPS which can easily take down Golems and other high health troops and leave lower health troops vulnerable. The Giant Bombs are all located in the core of the base. This makes it Anti-Hogs and also does a lot of damage to troops.

You might be thinking…Why is there an exposed cannon on the outside of the base?
This cannon will distract Giants, Balloons, Hogs (etc) that are placed in the area of the attack. This will buy time for the defender and cause the enemy troops to take unnecessary damage.

Summary: This base is very good against Hogs and Air Attacks due to its spread buildings and Giant Bomb placement. If the attacker is experienced it wouldn’t be too difficult to overcome but it is definitely a solid base and should be used. This base can also be used as a pushing base.

Note: Your base will always do better when all of the buildings, defences, traps and walls are at the Maximum level for Town Hall 8.

Thank you for reading my article, I hope it helps you out!