As to recent findings many people who are involved of some sorts or play the game of Clash of Clans have expressed a growing search for “CoC hack” or “free gems”. I am here to tell you, besides advanced automated processes such as ClashBot no other form of hack for clash of clans exists. We are here to provide information and resources that not only get you a step ahead in the game, but also make sure your security is withheld to the highest tier. No such Clash of Clans hack exist that offers free unlimited gems, unlimited elixir or ANY other form of resource. We warn you to stay away from all sites or programs that may attempt to make you aware of anything related. When visiting these websites and opening these programs not only are you putting yourself at risk, but you’re also generating an immediate threat of possibly spreading that malware. Do you wonder why? Read on this article and we will tell you the truth behind the myth clash of clans hacks.

Alternatives to Clash of Clans Hacks

Seeming as there is no easy way out of it and the only available option to quick riches in the Game Clash of Clans is ClashBot. It is a bot that uses automation processes and an advanced way of image recognition to guarantee your gains while you do other productive things with your time. ClashBot offers a vast amount of options to cover every aspect of game play. While it may not be as quick, it is the safest and most efficient solution for Clash of Clans cheating. It farms gold, elixir, and other resources automatically. We use an android emulator, BlueStacks, which runs on any PC using the Clash of Clans application from the Google Play store. You may check out how to get started here!

Does a Clash of Clan hack exist? Any day of the week you can type in your search engine Clash of Clans Hack and many results will pop up. The first thing you see pop up is either a YouTube video or site that features a generator for many resources used. Then you began to input the details in order to receive your free resources than an ad pops up stating you must first complete a survey or download & run a problem to claim or finish the process. Then you get the idea that something is fishy once you install 8 programs and doing 5 surveys while your anti-malware programs are going crazy on your computer. By that time, you finally realize that this doesn’t exist. However, there are alternative solutions to your wanting of clash of clans ‘hacks’ of sorts. There are very few places you could obtain these programs and ClashBot is one.

Why do absolutely no legitimate Clash of Clans hacks exist? Clash of Clans is a server based game, meaning all the data you see displayed on your phone (gold amount, how many gems you have, etc.) is actually being sent to your device from a secure server owned by Supercell. Any change to these values, such as collecting elixir from a collector in game, is carefully monitored by Supercell and authenticated to make sure each player is playing the game fairly. Manipulating your accounts data through other means would require hacking into Supercell’s servers and changing your account values manually, a highly illegal offence! So don’t waste your time filling out surveys or looking for a Clash of Clans hack, there is not much of a possibility that one even exists.

Many may ask, has any Clash of Clan hack ever existed? To be frank, no. They have always been falsified! However; due to the insufficient information on the topic of CoC hacks many people have been manipulated into thinking that such thing exists which has made it much easier for the people behind these schemes. Clash of Clan have a server-sided authentication system in which every transaction made, and every increase/decrease of gems, elixir, and etc. is documented. Such major increase, if possible would put you and your account at high risk of serious action. More than likely a permanent or extensive ban handed down by Supercell.

What are some examples of these fake sites or programs? By going to Google and typing in CoC hacks or Clash of Clans free gems and many other things along those lines there are thousands of entries on every possible search engine you could find. Many of these sites will basically ask for your username, how much elixir and/or gold you want and then have a ‘generate’ button you are ordered to press and it randomly shows a loading process of some sorts then either asks you to fill out a survey or to download a program. The survey is simply to make money off of you. they will have you repeatedly doing surveys until you finally give up. The programs will more than likely infect your computer and steal data from you. Maybe a key logger, or a RAT(remote administration tool). 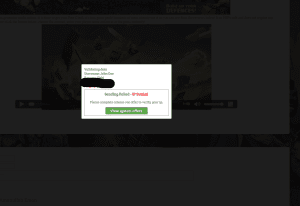 Surveys claim they are a Clash of Clans hack 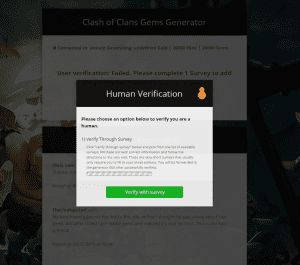 Survey start
But according to the YouTube video they really do have a ton of resources? This reminds me during the years of when a very popular game of RuneScape was exploited and eventually led to an influx of ‘private servers’. Private servers are simply just that, private games or games not relevant to the real besides of the content available. Those resources you see in the YouTube video are solely offline and cannot be used in no way the real game of CoC. In most, if not all of the YouTube videos they use ‘dummy’ accounts which are mainly low-leveled and are just for numerous reasons other than playing the game legit. Most of the time they modify files via application which is accessible by jail breaking or rooting your device to gain access to restricted data.

What else ClashBot is able to do? Our bot can actually help you in many situations beside farming resources. We offer trophy pushing, rearming (traps/xbows/infernos), donating and requesting troops automatically, advertising at chats and of course a great community with a lot of ingame knowledge which will help you to become better. The newest ClashBot version is able to read the text of your clan mate’s troop requests. You can set key- and blackwords which allow or disallow the donation for this specific request.

The purpose of this post was to be informative about the naive, money hungry people that currently roam around the free internet. CoC hacks are not real and steer clear from any site that is involved in such matter. There is no alternative hack than the technology that ClashBot provides. We are not the only, but we certainly are the best. The only solution to getting tons of Gold and Elixir isn’t a Clash of Clans hack, it’s ClashBot.